At almost seven foot tall, Breeze is not afraid or so he believed until the morning he almost trod on the scariest looking object he has ever seen.

He was walking slowly. The reason for this was simple. He could hear an unusual sound. It wasn’t the usual morning sound of bee’s buzzing or Mrs. Groundsel shouting at her grand children to hurry up and get out of bed. No this was a tiny sound that echoed inside his head.  The voice was high pitched and all he could hear was “No, Lizzie I said no.”

Who is Lizzie? He wondered. And looked down – then he saw a small tea pot. He questioned if this was Lizzie. A tea pot was for making tea. 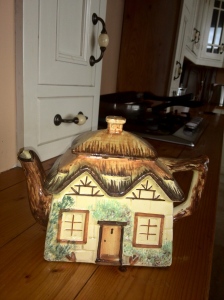 The mention of tea reminded him why he was walking towards the witches house. They had invited him to come visit them and enjoy breakfast.  As Elegant witch was a very brilliant cook, Breeze was looking forward to his breakfast. He picked up his pace and as he did so he heard the same tin high pitched voice say, “We should have taken a left at the fork in the river not a right.” Breeze decided to leave them lost, whoever them was. He trundled on a little faster and soon smelt, pancakes, raspberry jam and berry compote much to his delight.

When he arrived it was to discover there was an argument taking place between the two witches. “Did you send the invitations to them Lovisma?” Elegant stood with a wooden spoon twitching on the table before her. Breeze noticed the spoon was keeping pace with her right foot which was tapping the ground.

“I did. It is not my fault if our stupid relations don’t want to come and visit us. They probably think you clean too much and don’t want to be bossed about.” Lovisma said.

Elegant was now looking angry and Breeze considered sneaking away however Lovisma spotted him. “Hello Mr. Breeze, would you like some of Elegants amazing pancakes?”

In answer Breeze sat down and held out a plate. When he had eaten six pancakes and drank three mugs of apple juice he said, “What relations are you missing?”

“We are not missing them, they were invited, I think” Elegant paused to look at her sister. “To come and visit with us.”

“And they didn’t bother so there is more for Breeze and me.” As Lovisma spoke there was a soft pink hiss of smoke and there before them appeared – Lizzie the teapot.

Breeze smiled. “It’s okay if they are teapots. I like tea.” He said.

Lovisma held onto her hat and laughed so much she rolled off her seat. “They are not teapots, it is their house.” Bending low she shouted “Come out and hurry up we have almost eaten all of your breakfast.”

There were two loud pops followed by rainbow coloured smoke and two large smiling witches appeared before him.

Breeze decided they were too big for a tea pot and decided not to ask any questions but to eat as many pancakes as he could before they ate them.

Home of The Bookshelf Muse