It was snowing and yet the huge green ogre named Breeze was asleep. He was tucked onto his favorite branch high in the tallest oak tree in the wood. His excuse was – he was keeping watch for Santa.

Breeze adored the magic of Christmas. So when the very first flake landed on his nose, he stopped snoring and woke in a hurry, slid down the trunk of the wrinkly crinkly old tree and raced through the wood shouting “it is snowing. Christmas is coming, Santa is getting ready to leave the north pole.”

His friends, shook their heads and said, “he is never unhappy at this time of  the year.”

However when Breeze bumped into Lovisma, he lost his happiness. For she had hold of a wooden santa claus and was dangling him upside down. “I’ think I should fly up to the moon and drop him, lets see him fly then, ” she giggled at her own joke.

Lily, was sobbing “Please, don’t do it, he is only made of wood he can’t fly. He needs reindeer and magic.”

Breeze frowned.  “Lets see if Lovisma would fly if we took her broomstick away and tied her up nice and neat like a Christmas pudding.”

Lily stopped sobbing and looked at him. “Could you do it?”

Lovisma instantly dropped the wooden Santa and flew away. Breeze told Lily some jokes to cheer her and then they made a giant snow rabbit before they both went home for tea.

All evening long Breeze thought about the nasty witch. “Time I scared her good and proper,” he decided. He needed to think long and hard because Breeze knew that every witch has something she is terrified of.

It was Christmas eve and the wood was looking sparkling and festive. The trees were wearing their best winter coats and the birds had decorated some of the lower branches with holly, though the berries were missing.

Elegant witch had solved the problem by asking the knitting group to knit holly berries and attach them to the branches. She added her own dash of magic then making the berries twinkle with bright lights.

Breeze had baked. This was an event in itself and the mince pies did smell awesome, which he kept saying. However, Lily wondered why he had put a box of six pies to one side.  The label on the box said, For Lovisma, “Mr Breeze why did you give that nasty witch six mince pies and there will only be one for everyone else.”

He winked at her and said, “these are special pies just for her. Don’t let anyone touch them or there will be trouble.”

She wondered why he sounded a little cross but decided one of his mince pies would be enough for her. Besides Santa was coming.

The table for the midnight party was set and suddenly there was a cold rush of air. A cackle of laughter announced Lovisma’s arrival. She was looking really nasty in a purple and silver pair of leggings and a huge purple flouncy dress.

Yuck, you look like a giant blueberry. Matt announced.

Her answer to him was with a flick her wand to turn him into a snow ogre. Breeze said, “Be nice or no Santa.” She flicked Matt from snow ogre back to green ogre.

You can’t have one, Breeze told her. But you can have six to take home to Elegant witch. I made them for you both.” 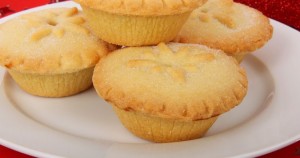 Lovisma smiled sweetly and said, “I think I will have one, just one now.”

However, once she started she couldn’t stop. Lovisma kept stuffing mince pies into her mouth until the box was empty.  “I feel a little odd.” She said.

Lily smiled. “YOu do look a little odd.” And she moved further away.

Not a moment too soon as Lovisma began to shake like a jelly, then spun around so fast she was a purple blob. Suddenly there was a loud pop and when everyone looked she appeared to have vanished leaving the purple dress in a heap on the ground then it began to move in hopping movements. Lily was the first to spot the new improved Lovisma. “OOh a frog I love frogs, can I pet her?”

“I can’t be a frog. I hate slimey frogs.” Lovisma the frog shouted.

Lily said ” but you are, look in the reflection in the glass. This is you a cute purple frog. ”

Each time Lovisma attempted to jump onto her broom she slid off, instead she hopped away screaming in horror.  “I hate you Breeze almost as much as I hate frogs.”

After that everyone was happy she had left but they were a little afraid of eating any of his mince pies. 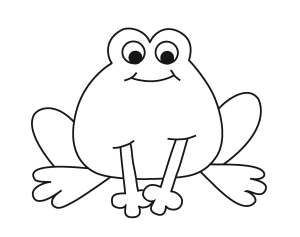 Breeze was asleep until the wood was filled with a bouncing sound. “Booinnnggggg” On and on it went, echoing off the trees, sky and ground until the tree shook and Breeze was shaken from his branch.

Now this is not good, he muttered and went to investigate.

It didn’t take long for him to find the cause of the noise.

It was really two causes, Lovisma and her favorite furry friend: Flippity Rabbit.

He stood on the ground and watched them play. Other animals had gathered round and they were not smiling.

For the two had created a trampoline made from spiders webs and were bouncing on it so much they had shaken the clothes from washing lines, petals from wildflowers, babies from their beds and more importantly children were finding it hard to eat their dinners as the dishes kept bouncing about the wood.

Breeze wanted to tear the net down and stop them from doing more damage except for one slight thing. He wanted to try to bounce and tumble on it.

Trouble was the net didn’t look strong enough to take his weight.

He opened his mouth and roared; “Stop!”

They didn’t because they couldn’t so Breeze did the next best thing: “Elegant. Help.”

She arrived in a blink of an eye. Took one look at her younger sister and said, “I knew Lovisma would be in trouble again, she can’t stay away from mischief for long. ” She raised her wand and looked a little surprised when Breeze pleaded with her not to make it vanish.

“Well I kind of like the idea of bouncing but it doesn’t look safe enough for me. And it is in the way of everybody here in the wood. Could you move it some where safer? Please?” He scuffled the grass at his feet as he waited for her answer.

“Very well, come on. We should do this sooner rather than later, I have dinner to make.”

Breeze wanted to ask, why she never simply zapped dinner instead of cooking it but he was a little afraid of witches. Even good witches have tempers. So he followed her to the edge of the wood where the river raced to the waterfall. They walked for a long distance before she stopped and turned to  him. “This will do nicely. The pool is close to the wood, the water doesn’t race along here and if the web breaks the water will break your fall. ”

She flicked her wand. The air sizzled and sparked for a moment. Then with a loud pop it appeared. A huge net high in the air, dangling above the water with Lovisma and Flippity still bouncing on it.

Breeze didn’t wait to be asked he climbed the nearest tree and took a dive onto the net.

However, he forgot about the others. With a squeal of delight Lovisma and Flippity shot high in the air and then with a loud splash they bounced straight off the net and into the water.

Much to everyone’s surprise the tiny witch loved it.

“Do it again Breeze do it again. ” Poor Breeze spent the rest of the evening bouncing on the net and sending those who wished to try it, shooting like rockets into the water.

“next time I get a good idea, I really should keep it to myself.” He muttered when he made his way home to bed very late that night.

Art and oddities by Rebecca Barkley

welcome to the virtual library