(Inspired by a dream from Breeze)

Tiny cloud was small and thin.

At first he didn’t notice how small he was.  He dived and soared. When he tired of this he stopped and looked around him. 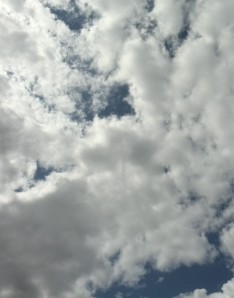 High above him large clouds rolled in an elegant and smooth fashion. They flowed through the sky.

A cloud ducked low over the earth and  sat on a mountain.  He must be tired, Tiny cloud thought.

Then as tiny cloud watched the giant cloud hugged the mountain.

“I want to learn to hug.” He  cried as he whizzed past his bigger friends.

“Slow down, enjoy” they whispered. “It will happen when it happens.”

He dived around the earth, wishing and hoping.

“I want to be big and great,” he shouted in his tiny voice.  No one heard  him.

He moved around the sky looking for clues.

He wanted to be bigger.  He was busy watching everyone else.

One day he realised he no longer soared and dived. He didn’t feel like playing and suddenly he noticed how small the birds, rabbits and trees below him looked.

“I like rolling,” he grumbled. “But I feel heavy.”

Tiny cloud began to sink, slowly at first, towards the earth.  He stopped over a mountain. He saw the stones and grass getting closer.

He wondered if he might swallow the mountain.  Suddenly he stopped grumbling and rolling.

He smiled. “I’m hugging a mountain.” He cried as the rain spilled from him.

With the rain gone, he felt light again. As he flew high into the sky to tell the other clouds he was singing, “I like hugging.”

Art and oddities by Rebecca Barkley

welcome to the virtual library